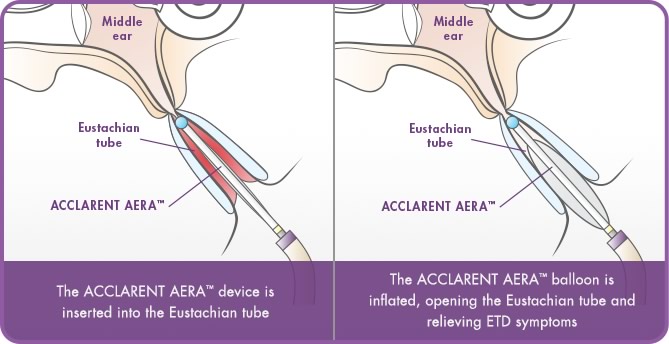 There is now a treatment option available for Eustachian Tube Dysfunction (ETD). The ear’s eustachian tube connects the sealed-off middle ear space to the back the nose/ sinuses to help keep ear pressure regulated. Blockage of the eustachian tube happens by conditions like allergies, sinus infections, adenoiditis, or just poor development to begin with. When the eustachian tube is blocked it can produce symptoms ranging from mild popping and clicking in the ear to pressure, to frank ear infection and hearing loss. Flying on airplanes or scuba diving will dramatically shift pressures and will exacerbate any existing ETD.

We have had the myringotomy and ear tube procedure for decades now to help clear pressure and fluid from the middle ear. However directly addressing the actual problem – a blocked eustachian tube has been elusive.

One reason – a very important reason – it is elusive is due to its location running parallel to the largest blood vessel supplying the brain and around a number of critically important nerves.   There is also the real concern about the longevity of the procedure given that it is dilating a relatively “stretchy” extend of the tube and intentionally not dilating the more rigid bony portions of the eustachian tube.

An “ear tube” simply bypasses the obstruction to most help with most of the symptoms. And unfortunately while a tube will solve many problems, you can’t scuba dive with a tube.

However we now have a potential treatment for a number of patients that actually targets the blocked eustachian tube directly – Eustachian Tuboplasty. This procedure uses a very specifically designed balloon and guide system to deliver a very specific dilation to to the cartilaginous and membranous portions of the eustachian tube.

Nasal endoscopes, modern light sources and fiberoptic technology have facilitated this procedure as much as the balloon itself has.

There is great evidence that at least in the intermediate term this can be very helpful for adults suffering from moderate eustachian tube problems or ear infections. The procedure is shown safe when carried out by a trained ENT and when proper pre-procedure assessment has been done (right now requiring a CT scan to show the blood vessels are safe in this area).

The Eustachian Tube Dilation procedure also has a special role in patients who enjoy swimming or SCUBA diving because it may be possible to keep the ears clear without the use of an ear tube.

Dr. Rogers was among the first in the Atlanta area to incorporate this procedure. It has been done in the operating room or in the office, either in isolation or part of a multi-sequence surgery. Along with an office visit a short ear test is also performed to ensure a proper diagnosis is made first (as other conditions that can mimic ETD include nasal allergies, TMJ syndrome, sinus infections and even primary headache).