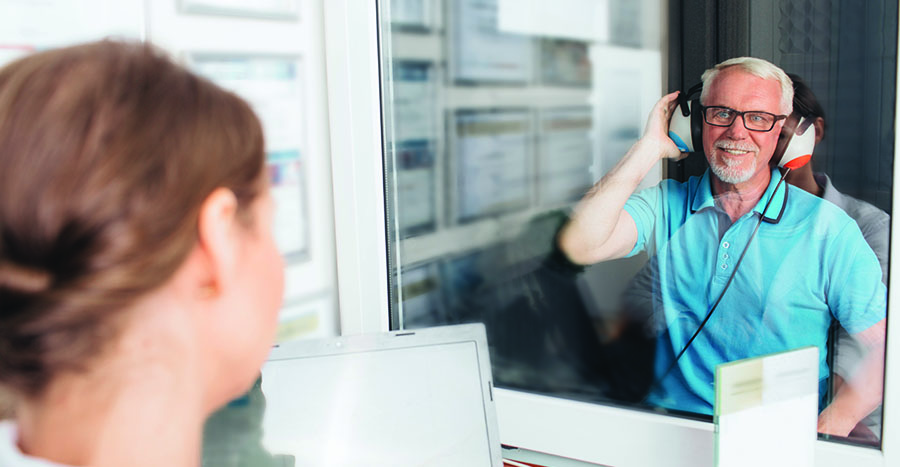 The diagnosis of a hearing loss, ear infection, or other ear disorder starts with a thorough examination of the outer ear, middle ear and inner ear. We examine the outer ear, ear drum, and middle ear with a small magnified light called an Otoscope. If necessary, we can also examine the area with a microscope which gives us a 5-20 times magnification of the area. Any wax in the ear canal is removed with instruments, suction or irrigation, in order to eliminate blockage of the ear canal and allow complete examination of the ear drum and middle ear. The Otoscope exam will detect any abnormality of the outer ear, excessive wax, ear infections, ear drum or middle ear. A normal eardrum will appear shiny and gray when viewed through an Otoscope, while an infected eardrum may appear red and fluid may be visible behind it.

Additional testing is performed to test hearing and function of the ear drum.

The inner ear may be tested in a variety of ways. An Audiogram is a test performed in a sound proof room with special instruments to test your ability to hear very quiet sounds at different pitches (frequencies, measured in Hertz [Hz.]). We normally test the full range of hearing, from 250 Hz. through 8000 Hz, which includes the narrower range of hearing of human speech. The test usually includes your ability to hear through the ear canal (air conduction) and by way of vibration of the bones of the skull (bone conduction). A test of understanding speech is also conducted.

Stapedial Reflex Testing. The stapedial reflex occurs in response to loud sound, tightening a muscle inside the middle ear space (the stapedius muscle). The test is used as a sensitive test of middle ear disease as well as a test for possible tumors on the hearing nerves.

Oto-Acoustic Emissions (OAE) testing is a test of inner ear nerve cells which are set in motion by sounds produced by an OAE probe placed in the ear canal. Sounds produced by the motion of these nerve cells are reflected back, (somewhat like an echo) and picked up by the microphone of the OAE probe. A normal result on this test is suggestive of normal hearing. The exam is used for infants and other young children who are unable to respond to traditional hearing testing and in adults to test for mild losses of hearing.