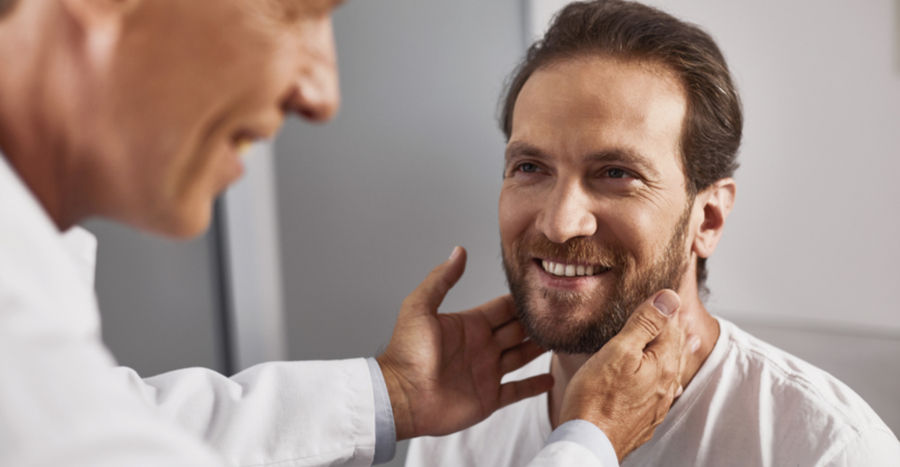 The thyroid gland is a butterfly shaped organ found at the base of the neck.  Its function is to use dietary iodine to produce thyroid hormones thyroxine (T4) and triiodothyronine (T3).  These hormones are secreted into the bloodstream where they are transported to regulate the metabolism of all the cells in the body.  The thyroid gland produces far more T4 than T3, but T3 is the much more potent form of thyroid hormone 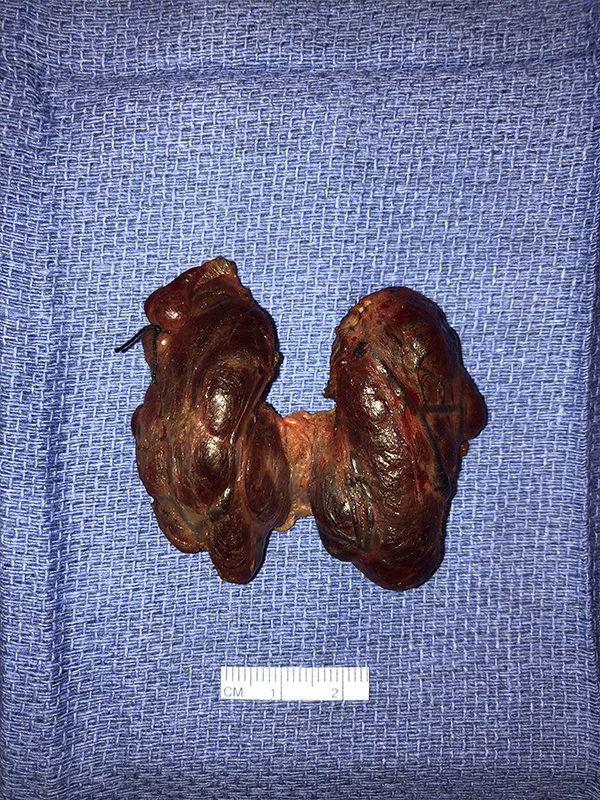 Here is a photograph of a normal appearing thyroid gland

Thyroid nodules are growths which occur in the thyroid gland, and they are most often spherical in shape (like a marble).  Nodules may be found during physical examination of the neck during an annual physical, or incidentally on CT or MRI scans of the neck or chest performed during the workup for other medical conditions.  Thyroid nodules are extremely common, and are found in approximately 50% of people over the age of 40.  About 90% of these nodules are benign, and only require periodic surveillance.  Unfortunately, there are no medications which are routinely used to reduce the size of or eliminate thyroid nodules.  Nodules are best imaged through ultrasound, and certain characteristics increase or decrease the likelihood of a thyroid nodule requiring further workup.  If the nodule meets the criteria, a fine needle aspiration biopsy will be recommended to sample the cells inside the nodule to see if there is concern for cancer.  If there is thyroid cancer or concern for thyroid cancer, surgery will be recommended.  Nodules that are very large (>4 cm) require surgical excision because the risk of a false negative fine needle aspiration biopsy (benign biopsy, when in fact cancer is present) is about 15%.  Thyroid nodule radiofrequency ablation (RFA) is a newer technique that allows us to shrink or destroy a thyroid nodule without surgery.

A thyroid goiter is a benign enlargement of the thyroid gland.  It has many nodules, which can grow and compress the nearby structures in your neck such as the trachea (windpipe) or esophagus.  Large thyroid nodules or goiters cause symptoms such as difficulty swallowing or a sensation of choking when laying down to sleep at night.  There is no exact size at which a nodule can become symptomatic, but it is generally about 3 cm in size.  It really depends on each individual’s unique anatomy.  Occasionally, a thyroid goiter will grow down into the chest.  These goiters are called substernal goiters, because of their location beneath the sternum (breastbone).  These goiters are nearly always symptomatic in some form, and they should be removed with surgery.  Over 99% of these goiters can be removed from an incision in the neck, but occasionally the sternum (breastbone) must be split to remove a diseased thyroid in its entirety. 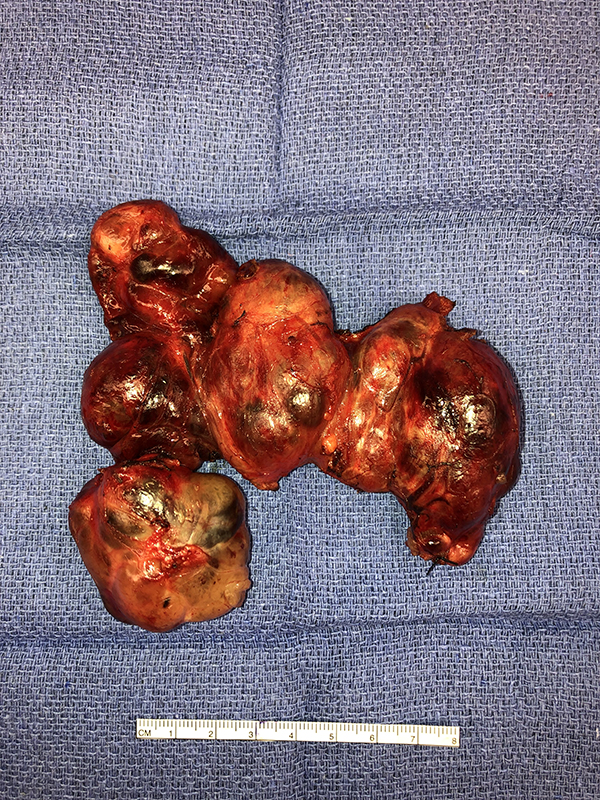 Here is a photograph of a multinodular thyroid goiter

If cancer is found in a thyroid nodule, surgery to remove the thyroid (thyroidectomy) is recommended.  The prognosis for the majority of thyroid cancers is excellent.  For small cancers, removal of that half of the thyroid gland is all that is necessary.  A total thyroidectomy may be recommended based on the size and type of cancer, and lymph nodes beneath the neck or in the side of the neck are removed in the same setting if they have cancer cells present.  Even those who have cancer with lymph node involvement have an excellent prognosis.  If lymph nodes are involved or the final pathology from surgery has certain features, radioactive iodine (a pill which uses radioactivity to destroy any remaining thyroid cancer cells) is used rather than conventional chemotherapy or external beam radiation.

Hypothyroidism, or an underactive thyroid gland, occurs when the gland simply does not produce enough hormone to sustain normal metabolism.  Symptoms of hypothyroidism include fatigue, weight gain, brittle hair, constipation, depression, and memory problems.   The most common cause of hypothyroidism is Hashimoto’s thyroiditis, or autoimmune thyroiditis.  This conditions is very common, and it is screened annually on a routine physical with measurement of thyroid stimulating hormone (TSH) levels.  The treatment of an underactive thyroid involves supplements with synthetic thyroid hormone pills such as levothyroxine (Synthroid) and making sure the dosage is correct through bloodwork.

Hyperthyroidism, or an overactive thyroid, occurs when a nodule or the entire gland produces more hormone than necessary.   Symptoms of hyperthyroidism include sweating, palpitations, tremors, weight loss, and insomnia.  Overactive nodules are called toxic nodules.  If the entire thyroid is overactive, the problem is an autoimmune disease known as Graves’ disease.  In this disease, the body produces an antibody which inappropriately stimulates the thyroid gland.  For both of these conditions, the treatment can either be anti-thyroid medications such as methimazole or propylthiouracil (rarely used), radioactive iodine (a pill which uses radioactivity to destroy the overactive portions of the thyroid gland), or surgery to remove the overactive portion of the gland.

For more information on thyroid and parathyroid diseases, visit www.thyroidandparathyroid.com.