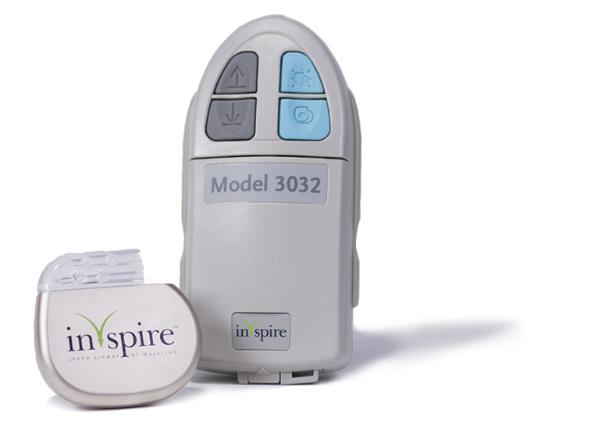 Sleep apnea (stop breathing spells during sleep) is caused by collapse of the airway during sleep due to excessive tissue and/or poor muscle tone. While the most common site of airway collapse is at the level of the soft palate, uvula and tonsils, many patients also have airway narrowing in the lower part of the throat behind the tongue. Snoring is caused by vibration of floppy or excessive tissue in the airway. Snoring is usually caused by vibration of the back edge of the palate, uvula, or tonsils but can also be from vibration of the back of the tongue. The Inspire Neuro-stimulation procedure is performed under general anesthesia (you are asleep) in the operating room. The purpose of the operation is to implant a nerve stimulator to give additional muscle tone to a nerve in the neck so as to prevent collapsing of the throat during sleep. There are 3 parts of the implant: a small nerve stimulator, a sensing lead and a stimulation lead. The only external component is a small handheld remote control used to turn the therapy on before bed and off upon awakening. The procedure is performed through a horizontal incision in the right upper neck to place the stimulation lead, an incision just below the right collar bone to place the stimulator and an incision in the right lower chest to place the stimulation lead. Patients may spend overnight in the hospital or may be able to go home the same day. Most patients are pleasantly surprised at the level of comfort post-operatively, and are usually eating, drinking and talking the same day as their procedure.

Wound care is minimal and involves keeping the incision dry for the first 48 hours after surgery. Steri-strips (skin tapes) are placed over the incision and should remain until they are removed the office. The pressure dressing may be removed after 2 days. A shower can be taken 48 hours after surgery but try to minimize washing directly over the incision. You should wear a sling for a few weeks so as to avoid moving the right arm too much. Patients are encouraged to perform deep breathing exercises with an incentive spirometer (provided by the hospital) after surgery to minimize fever and improve lung function after anesthesia. Exercise regimen can be resumed 30 days after surgery. Time off work or school is typically 1 week. The first post-operative visit is scheduled at 7-10 days after the surgery at which time sutures or steri-strips are removed. Skin care products such as BioCorneum, Vitamin E cream and Aloe can be started after that visit. We wait a month prior to turning on the stimulation after which you may adjust the stimulation level to a point that you are sleeping better. A follow up sleep study will be done for a final adjustment of the stimulation level.

A large research study published in the New England Journal of Medicine found an approximately 70% success rate for sleep apnea and 85% for snoring. Higher or lower success rates may be achieved depending on your anatomical findings. Apnea may persist if there are other areas of airway narrowing that have not been treated.

Alternatives include self help therapies, device therapies and surgery. Self help therapies include weight loss, sleep positioning maneuvers to avoid sleeping on the back and avoiding alcohol prior to bedtime. Device therapies include CPAP, BiPAP, AutoPAP which all pump air through a tubing, connected to a mask (either over the nose and mouth, just over the nose or “pillows” going up the nose). CPAP is a constant pressure as you breath in and out, BiPAP involves a higher pressure as you breath in and a lower pressure as you breath out and AutoPAP is a machine that changes the pressure throughout the night. Custom made sleep oral appliances are designed to either hold the jaw forward during sleep or hold the tongue forward. The jaw advancement appliances are more successful but require that you have solid healthy teeth. Provent therapy is a band-aid like device that covers your nostrils with a one way valve, that makes it hard to exhale through the nose.

Surgical therapies include nasal surgery which improves breathing through the nose including septoplasty to straighten the nasal septum, turbinate reduction, nasal valve repair and endoscopic
sinus surgery. Surgeries on the upper part of the throat include UPPP, uvulo-palatal flap, ZPPP, lateral pharyngoplasty, expansion sphincterplasty, transpalatal advancement, and tonsillectomy. Several minimally invasive office palate procedures can also be done for selected patients including pillar implants, palate somnoplasty and injection snoreplasty. Surgeries on the lower part of the throat include genioglossus advancement, hyoid advancement, tongue suspension, tongue radiofrequency, robotic tongue reduction, and jaw advancement. Advanced Ear Nose & Throat Associates/Advanced Sleep Centers is the only center in Georgia performing all of these treatment options. We consider all of the options available before helping you choose the best one for you. 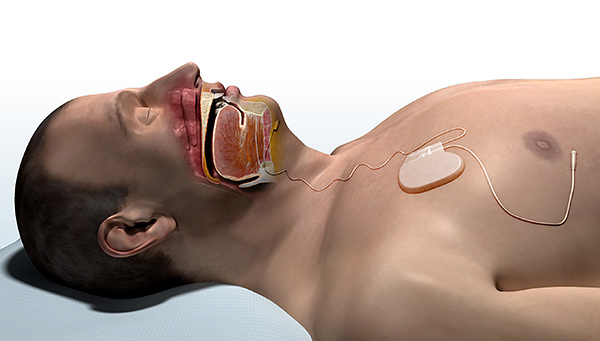