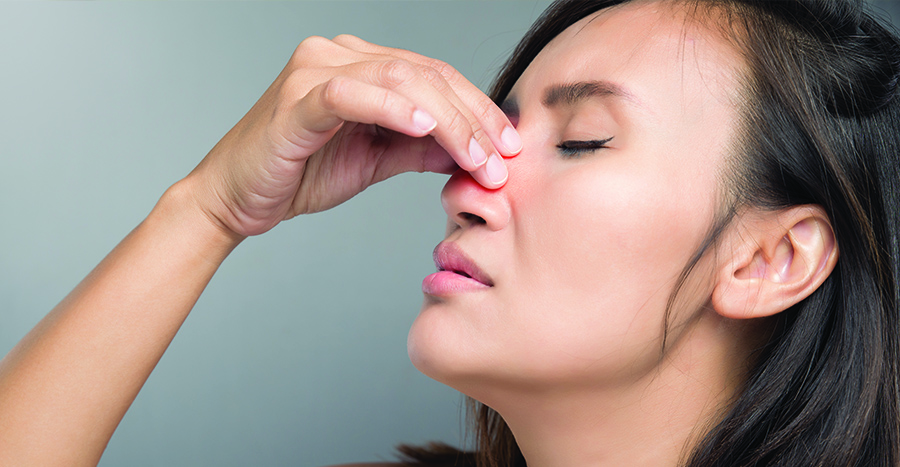 Nasal polyps are a special kind of nasal inflammation that are an exaggerated overgrowth of otherwise normal nasal tissue.  Nasal polyps can get very large and obstruct the sinus tracts and breathing channels resulting the obstructed nasal breathing and chronic sinus infections.  Polyps also may remodel and erode the bones of the skull base and eye sockets.  Chronic sinusitis due to polyps represents about 15% of our sinusitis patients, but is far more likely than average to require surgery and long-term anti-inflammatory treatments.

A special kind of allergy to certain fungal organisms results in fairly aggressive polyp overgrowth within the sinuses.  These polyps will produce thick pasty mucous and are very likely erode the bones within the sinuses (sometimes dramatic!).  Allergy treatment directed at molds, in addition to nasal steroids are a must.

A vigorous allergy to aspirin and related compounds (even trace related chemicals found naturally in some foods) causes a significant allergic response in some patients.  This allergic response results in large nasal polyps and asthma.  The allergic reactions may be low-grade and continual but often can be quite strong and even deadly.

Like other forms of polyposis, surgery and anti-inflammatory nasal steroids are a mainstay of treatment, and polyps are likely to eventually return one day.  Absolute avoidance of aspirin and related compounds is very important (although some patients may benefit from aspirin desensitization therapy).